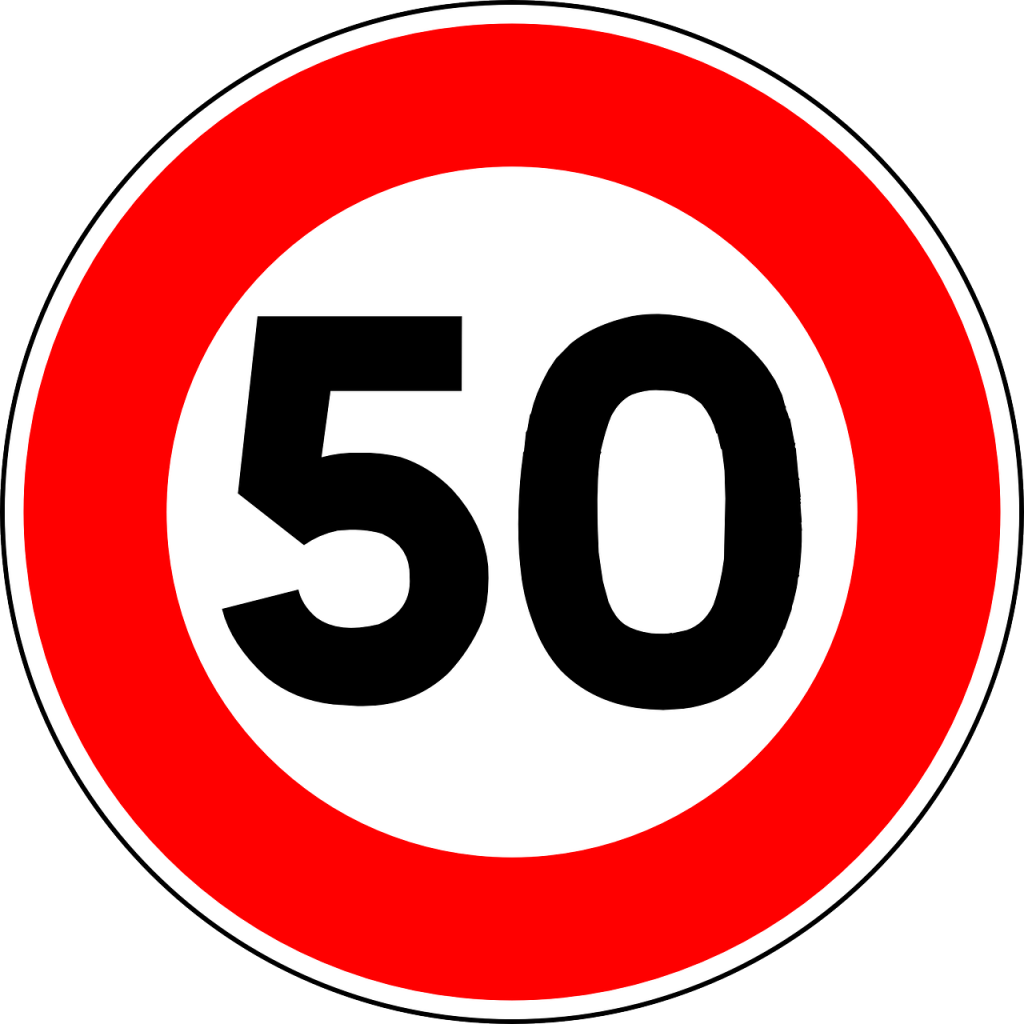 French speed limits, unlike the UK are variable. The limits depend on the type of road and weather conditions.

Speed limits are also indicated in kilometres per hour or km/h and not miles per hour, mph.

The standard speed limit on French Autoroutes is 130km/h. This is reduced in bad weather to 110km/h and 50km/h when visibility is down to 50m.

Motorways without tolls and dual carriageways have slightly lower speed limits. Starting at 110km/h and reducing in rainy weather to 100km/h and again to 50km/h when visibility is down to 50m.

For all other roads outside of built-up areas, the speed limit is set at 80km/h which reduces to 70km/h in wet weather and then again down to 50km/h when visibility is reduced.

For urban areas, the speed limit is somewhat lower as you’d expect. The limit 50km/h irrespective of the weather unless signage says otherwise.

Along every major road, you’ll see similar speed limit signs to those in the UK. These are standard round white signs with a red border with the limit inside. You’ll also see a number of repeated signs along the way to remind you.

Obviously those who drive in the UK will of course be used to mph and not km/h. Many modern vehicles have digital displays allowing you to easily change from mph to km/h at the touch of a button. Older vehicles will of course generally have both mph and km/h on the speedometer however usually some of the writing is very small. To help you remember what the equivalent speed in mph is, we’ve listed to speed limit conversion from km/h to mph. To make things even more straightforward we have rounded the numbers to the nearest mph.

In 2018 the French Government decided to reduce the national speed limit on normal roads from 90 km/h down to 80 km/h. The reduction affected over 400,000 km of roads across the country and was introduced in an attempt to reduce deaths on the roads.

These types of roads, without any form of central barrier and similar to many A and B roads in the UK were the cause for almost 2/3 of all road fatalities, and as such the French Government had to take some form of action to try and reduce this horrific number of needless deaths.

If you do not adhere to the speed limits you could suffer more severe penalties than if you were in the UK.

French law enforcement officers take road traffic offences very seriously and on the spot fines are often given out. Fines in France for speeding are graded depending upon the speed you’re travelling at, above the limit.

On the spot fines start at €68 and rise quite considerably depending upon your excess speed. The average figure we hear banded about for speeding fines tends to be around €135 however the maximum for travelling 51km/h over the limit stands at around €1500.

The fines mentioned above are not the only implications of speeding as licences and vehicles can also be seized by police depending upon the severity of the offence. You have been warned!

Any cookies that may not be particularly necessary for the website to function and is used specifically to collect user personal data via analytics, ads, other embedded contents are termed as non-necessary cookies. It is mandatory to procure user consent prior to running these cookies on your website.